"From the land of pleasant living..."

I'm rather envious of how productive some of my fellow bloggers have been recently. For me, traditional holiday activity, combined with ongoing family needs, has pretty much negated any opportunity to really dig into meaningful work in the basement.

But I did steal some time recently on the computer to do some additional research on Baltimore and surrounding areas in 1960. I was most interested in confirming popular local brands from that time for use as layout signage and for ambience in the lounge area. Significant identifiers such as beers, soft drinks, restaurants, TV/radio and professional teams seemed like good places to start.
﻿﻿﻿

I enjoy research because you never know what you may uncover. One other interesting tidbit comes from the Carling Brewery, which handled Natty Bo for awhile. They introduced a malt liquor product around this time, long before political correctness was even a concept. Although it was called Colt 45 and used a pistol as its logo, it allegedly was named after Colts running back Jerry Hill who wore number 45. I can't verify that, or simply attribute that to folklore. Either way, it's part of the fun of research.

Having said that,  I am really chomping at the bit, as they say, to get back to building and modeling. One can hope. Cheers.


-30-
BONUS:  JUST  ONE  MORE  THING  BEFORE  WE  GO...
This photo from the Baltimore Sun archives shows a National Bohemian delivery truck... definitely something that looks like it can be fabricated from one of my many Mini-Metals HO scale vehicles. 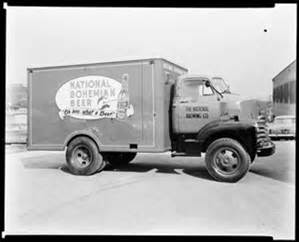 Email ThisBlogThis!Share to TwitterShare to FacebookShare to Pinterest
Labels: Modeling